In April last year, LG Electronics announced its withdrawal from the mobile business. Since then, many patent companies have attempted to purchase LG's telecommunication-related patents. Experts also predicted that LG Electronics' patents are likely to be sold because it is expensive to maintain. However, LG Electronics decided to retain the patent even if it withdrew its mobile business. This is because wireless communication technology is widely used not only in mobile, but also in smart home appliances and IOT-based products. 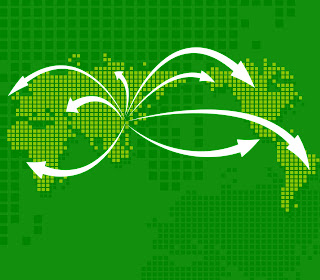 Recently, LG Electronics has been winning the standard patent litigation, once again being recognized for its technological prowess in the wireless communication field. LG Electronics, which had filed a patent infringement suit against Wiko in 2018 against Wiko, filed a lawsuit against Wiko in Germany after winning the lawsuit. In the end, Wico's parent company, Tinno of China, signed a global patent license agreement with LG Electronics. In addition, it won the LTE standard patent litigation with China's TCL, leading to a decision to recall, discard, and ban products that have already been sold. 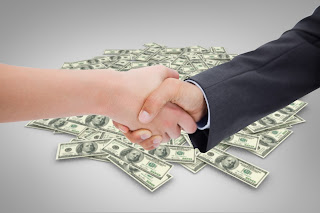 LG Electronics is continuously conducting R&D to secure the core source technology of 6G. Following the establishment of the 'LG-KAIST 6G Research Center' with the Korea Advanced Institute of Science and Technology in 2019, in early 21st, collaboration with Keysight Technologies Inc., a global wireless communication test and measurement equipment manufacturer, was strengthened. In August of this year, using the 6G THz (terahertz) band, it showed the result of transmitting communication signals over 100m outdoors. It was also selected as the chairperson of the 'Next G Alliance' hosted by the American Telecommunications Industry Association (ATIS). It is expected to play a key role, such as discussing 6G related prior art and suggesting service directions. 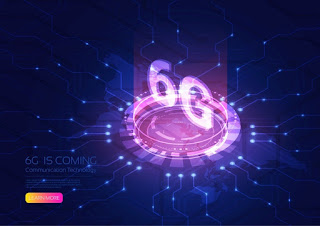 The government is also busy with plans to lead the international standards for 6G technology. The Ministry of Science and ICT held a public-private joint 6G strategy meeting and established a R&D action plan. LG Electronics is also expected to be affected as the government aims to become the world's No. Attention is paid to whether LG Electronics can lead the wireless communication field in the 6G field as well.

We'd like to express our sincere thanks to everyone who has visited and cared for our blog.
We hope that our heart to communicate was touched to you by delivering news of intellectual property and WIPS Global through the blog.
We will do our best to make more useful and interesting blog in the future.
Hopefully the COVID-19 will end soon and welcome a beautiful spring. 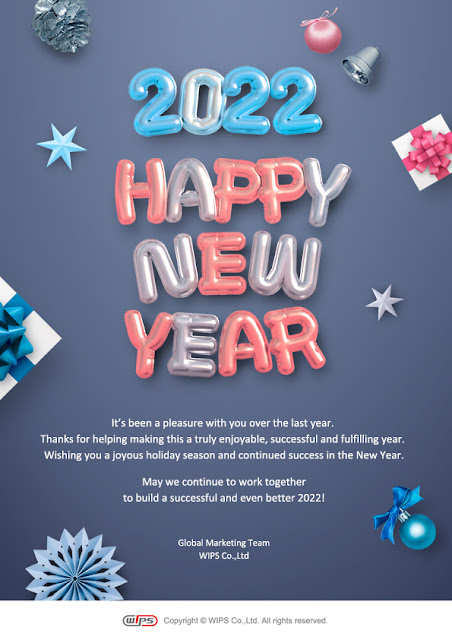 Posted by WIPS Global at 8:45 AM No comments:

Email ThisBlogThis!Share to TwitterShare to FacebookShare to Pinterest
Labels: 1. WIPS

How many medical robot patents have been filed?

Robot technology used in various industries is becoming more sophisticated by combining artificial intelligence (AI), Internet of Things (IoT), cloud computing, and augmented reality (AR). The robotics industry that provides medical services is also continuously growing. Medical robots include robots for surgery performing/assisting or simulating, robots for diagnosis/inspection, rehabilitation robots, and pharmaceutical robots. According to the Macquarie Consortium, the global medical robot market will grow from $1.7 billion in 2017 to $13.4 billion in 2025, and surgery-related robots account for more than 70% of the market.(1) If so, I wonder how many patents related to medical robots have been filed? In this issue, we will look at the flow of patent applications related to medical robots over the past 20 years. 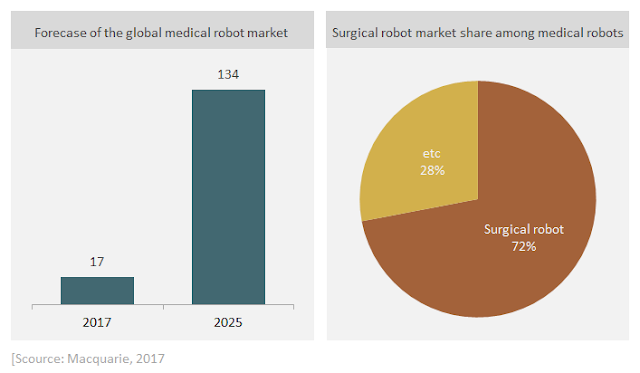 What is the trend of applications over the last 20 years?

Medical-related robot patents filed in the United States, China, Korea, Japan, and Europe have steadily increased since the 2000s, and have risen sharply since 2015. In particular, the number of applications filed in China increased sharply. It has overtaken the United States in terms of total application volume. Currently, about 43% of all patents are filed in China, with the US accounting for about 28%. According to the Chinese government (National Food and Drug Administration), the medical robot market in China has grown at a CAGR of 10% since 2014, surpassing USD 130 million in 2018, and is expected to grow at a CAGR of 15% over the next five years. do. In the past, it had grown centered on rehabilitation robots based on active government policies, but it is expected that surgical robots will become the mainstay in the future. (2) 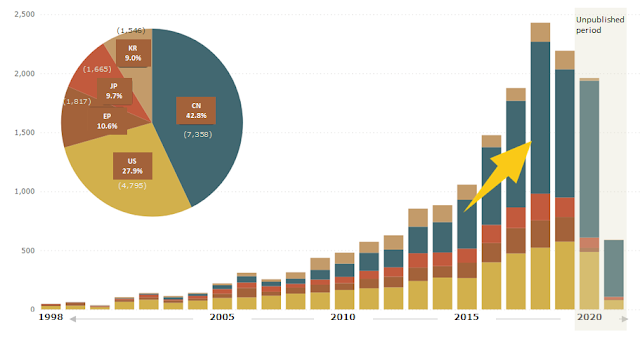 Which applicant has applied the most?

Also, looking at the proportion of applications by country, Chinese applicants are very concentrated in the domestic applications, while Philips (the Netherlands) and CMR Surgical (UK) have applied evenly. You may be curious about the double CMR Surgical. As a start-up related to surgical robots, they are developing a surgical robot system ‘Versius’. Since its founding in 2014, it has secured an investment approaching $1 billion and is currently attracting attention as it is valued at $3 billion.(3)

Let's check the competitive of patents!

Patents are not only about quantity, but also about quality. This time, we will check the IP competitiveness of the top applicants by using the SmartAngle of WIPS Global. We can look at the quality level along with commercial skill level. We used the results of analysis of technology impact index (CPP) and market power (PFS) in accordance with the applicant/applicant's nationality. There is a contrasting result between the 1st and 2nd places. Intuitive Surgical has a relatively strong market dominance, while Ethicon has a strong technological influence. 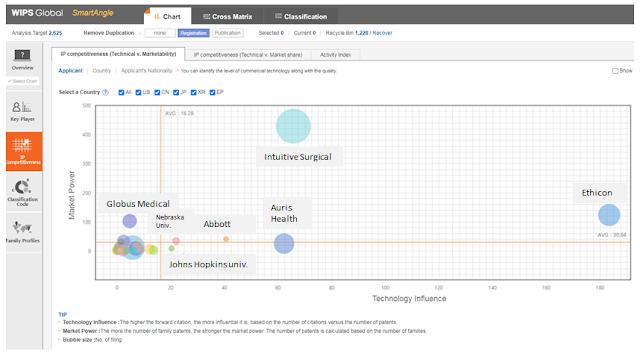 On the other hand, Aurisj Health's market power is not strong, but its technological influence is above average. Abbott shows a similar trend. St. Jude Medical (established in 1976), acquired by Abbott, an American medical device company in 2017, specializes in heart-related diagnosis and treatment. They developed an artificial heart valve and later launched the world's first defibrillator based on a 4-pole electrode system. They have mainly applied for a patent related to the catheter (thin surgical tube) robot system that can be used for cardiovascular treatment.

China has been actively fostering the industrial robot market by declaring ‘The Rise of Robots’ in 2016. Applications from the Chinese national research institutes, the Chinese Academy of Sciences (CAS) and Harbin Institute of Technology, appeared at the top of the list. Edge Medical, which took 5th place, also stands out. As a medical robot startup established in Shenzhen in 2017, it is developing a laparoscopic surgical robot capable of minimally invasive surgery and has recently received an investment of $90 million.(4)

On the other hand, in the United States, most of the top companies in the entire ranking. As for Globus Medical, which was not mentioned earlier, founded in the United States in 2003, as a robot system company related to orthopedic surgery such as artificial joints, it is leading the spinal implant market.

Next, we will look at the top applicants from Europe, Korea and Japan.

In Korea, besides Intuitive Surgical, Mirae Company and Curexo have the most applications, followed by Hanyang University and Samsung Electronics. Established in 1984, Mirae Company started out as an industrial equipment company, but entered the surgical robot and 3D sensor market to diversify its business. They are selling Revo-i, a laparoscopic surgical robot. Meanwhile, Curexo, established in 2006, sells the nation's No. 1 artificial joint and spinal surgery robot, Cuvis. It has been confirmed that Samsung Electronics has also applied for patents related to surgical robots and rehabilitation robots. 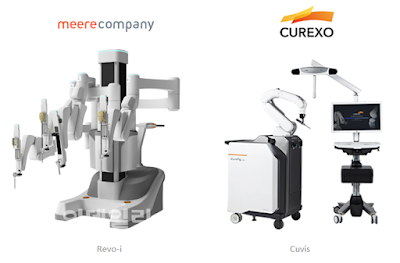 In Japan, Philips and Medicaroid stand out. Philips is a global medical device manufacturer. They’ve filed a lot for robotic technology related to diagnostic equipment. Medicaroid was established in 2013 as a joint venture between Kawasaki Heavy Industries, which is famous for industrial robots, and Sysmex, a company specializing in medical diagnostics, and is developing surgical robots. Hinotori, Japan's first surgical robot, is a product of Medicaroid.

What are the key keywords?

Let's take a look at the technology keywords with WIPS Global' SmartCloud. Smart Cloud is the result of keyword clustering applied with artificial intelligence technology. Obviously, there are many keywords related to Surgical Instrument/Robot/Tool as the proportion of surgical robots is high in the medical robot field. Excluding them, End Effector has the most. An end effector is a device/tool ​​at the end of a robot arm, which can be thought of as a human hand. In addition, you can check fixedly connected, Connecting Rod, Rehabilitation Training, Tail End, etc. 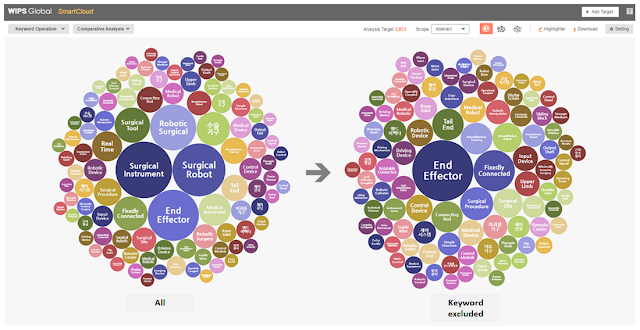 We looked at the patent trends related to medical robots that have been applied for the past 20 years. The medical service robotics industry is expected to continue to grow, but on the other hand, the competition is getting fierce. It is exciting to see how the relevant companies will move to gain a technological edge and expand their market dominance.

Posted by WIPS Global at 9:13 AM No comments: